Today marks the kick-off for the general conference and exhibition at IQPC’s annual cold chain conference in Chicago.  Among all pharma events in the USA, this one features exhibits from pretty much anyone who is anyone in the pharmaceutical cold chain.  Leading up to the event, Todd Keefe published an article in M2M Revolution where he cites that the demand for transporting medical and pharmaceutical products is exploding. He then states that there are significant challenges associated with moving time and temperature sensitive cargo in a way that keeps the cold chain intact, and ensures documented quality of delivery. 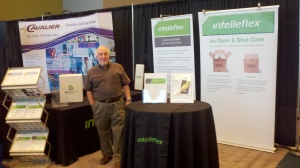 Ready to go at the Intelleflex Exhibit at IQPC in Chicago

One of those challenges relates to air cargo.  Keefe writes: Pharmaceutical companies and shippers of perishable commodities need same-day service to move their wares around the country. Yet most of the active air transport containers (with compressors and active monitoring devices) are limited to wide-body aircraft, which are almost exclusively used today for international routes.

So, as active refrigeration options from commercial carriers become harder to find (and likely more expensive) as wide body planes like 747s and 767s are shifted purely to international flights, what are the options?

Keefe discusses a recent test project between Southwest Airlines, Cold Chain Technologies and Intelleflex.  He writes that, at IQPC: Cold Chain Technologies is showcasing a new reusable packaging system that combines vacuum insulated panels, refrigerant materials, and embedded RFID temperature tags from Intelleflex that can maintain a 2°-8°C internal temperature for up to 120 hours.   This type of packaging, when combined with a flight schedule such as Southwest Airlines Cargo’s 3,300 daily nonstop flights, gives shippers a number of options for moving temperature sensitive cargo anywhere in the United States in a matter of hours.

I agree. The option of utilizing a major air carrier’s massive flight schedule to successfully and safely ship temperature sensitive pharmaceuticals across the USA provides a new option for cold chain logistics.

Keefe then describes the project: Cold Chain Technologies, Intelleflex and Southwest validated the solution last month with a pharmaceutical test package that traveled between Dallas, Austin, Los Angeles, and San Jose. The time of the journey was six hours and 20 minutes, including time spent in the cargo holds and on the tarmac moving from plane to plane. The external temperature ranged from 78° F to 89° F, yet the internal temperature of the package (which was read repeatedly) remained between 2° and 4° C. The test showed how shipments that need to be maintained between 2°-8°C can be easily shipped with proper temperature management via Southwest Airlines.

You can see these products on the show floor at IQPC today and tomorrow.  Visit us at Intelleflex at booth 40.  I hope to meet you there!

We get a lot of inquiries from people asking if we can do real-time location systems (RTLS).  According to our pals at Wikipedia:

Real-time locating systems (RTLS) are used to automatically identify and track the location of objects or people in real time, usually within a building or other contained area. Wireless RTLS tags are attached to objects or worn by people, and in most RTLS, fixed reference points receive wireless signals from tags to determine their location.[1] Examples of real-time locating systems include tracking automobiles through an assembly line, locating pallets of merchandise in a warehouse, or finding medical equipment in a hospital.

The physical layer of RTLS technology is usually some form of radio frequency (RF) communication, but some systems use optical (usually infrared) or acoustic (usually ultrasound) technology instead of or in addition to RF. Tags and fixed reference points can be transmitters, receivers, or both, resulting in numerous possible technology combinations.

RTLS are a form of local positioning system, and do not usually refer to GPS, mobile phone tracking, or systems that use only passive RFID tracking. Location information usually does not include speed, direction, or spatial orientation.

Do you know where I am?

Why are they calling?

Generally, the people asking about this are trying to develop some sort of a personnel security application, often related to mustering in the event of a disaster or evacuation.  They’re looking for a system that tells them exactly where people are located in a building and/or if they’ve left. Some also want to track valuable assets.

We tell them that Intelleflex doesn’t provide RTLS systems but we do provide something we call “MicroZoning” and explain that, by using the range and performance capabilities of our battery assisted passive RFID, we can tell you that people are in a particular zone or area, though not precisely where they are.  They say they wanted RTLS and  thank us for our candidness and we end the conversation.

Simply put, by using RFID to triangulate where badges are located, we can determine where a person or object is located within a few feet.  (The size of the area is determined by the number of antennas used…the more antennas used, the smaller the zone.)  So, for example, you could determine that I’m in my office but you couldn’t tell if I was sitting at my desk or if I was standing near the door (or hiding under my desk!).  But, for many applications, that’s more than adequate.  If you’re evacuating a building, you may just want to know that all of the rooms are vacant.  With MicroZoning, you may be able to determine that far more cost-effectively than by using an RTLS system.

There’s another couple of benefits.  With RFID, you can set up entry/exit monitors to track people as they come and go out of the building.  For evacuations, you can note that 50 people may have entered the building but only 48 have left.  You can also set up RFID readers at mustering points to easily identify who’s in the assembly area.

So, if you’re in the market for security or mustering applications and find RTLS just too costly, you may want to consider MicroZoning as a more cost-effective alternative.  You can learn more about our solutions here.